Business Times: The beauty of giving to those you do not know 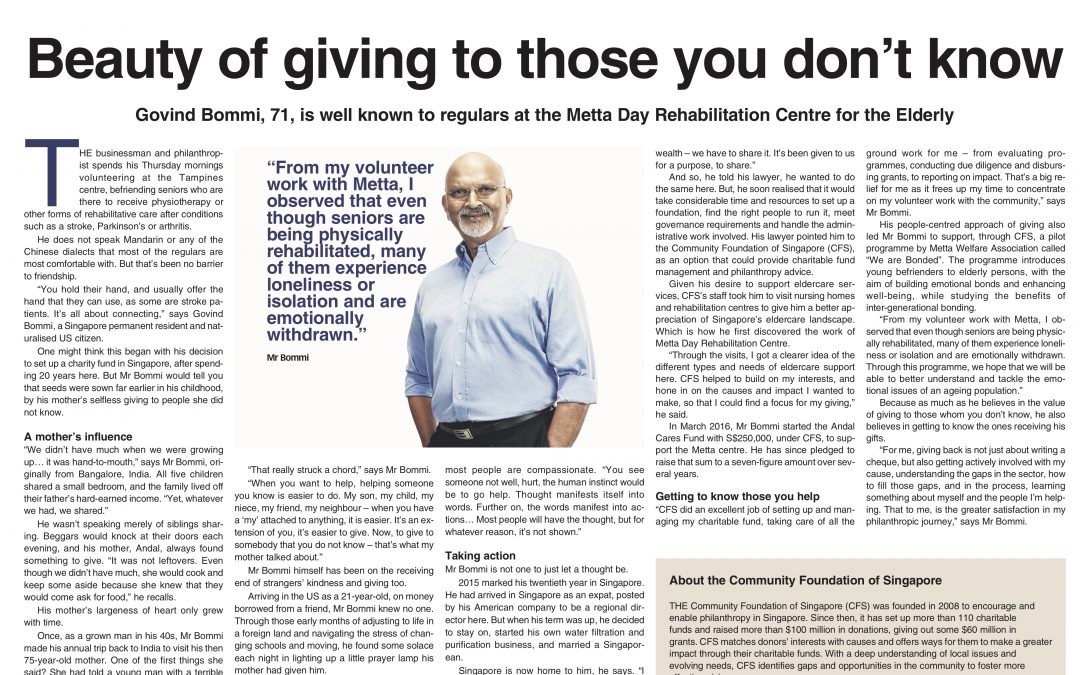 Govind Bommi, 71, is well known to regulars at the Metta Day Rehabilitation Centre for the Elderly.

The businessman and philanthropist spends his Thursday mornings volunteering at the Tampines centre, befriending seniors who are there to receive physiotherapy or other forms of rehabilitative care after conditions such as a stroke, Parkinson’s or arthritis.

He does not speak Mandarin or any of the Chinese dialects that most of the regulars are most comfortable with. But that’s been no barrier to friendship.

“You hold their hand, and usually offer the hand that they can use, as some are stroke patients. It’s all about connecting,” says Mr Bommi, a Singapore permanent resident and naturalised US citizen.

One might think this began with his decision to set up a charity fund in Singapore, after spending 20 years here. But Mr Bommi would tell you that seeds were sown far earlier in his childhood, by his mother’s selfless giving to people she did not know.

A mother’s influence
“We didn’t have much when we were growing up… it was hand-to-mouth,” says Mr Bommi, originally from Bangalore, India. All five children shared a small bedroom, and the family lived off their father’s hard-earned income. “Yet, whatever we had, we shared.”

He wasn’t speaking merely of siblings sharing. Beggars would knock at their doors each evening, and his mother, Andal, always found something to give. “It was not leftovers. Even though we didn’t have much, she would cook and keep some aside because she knew that they would come ask for food,” he recalls.

His mother’s largeness of heart only grew with time.

Once, as a grown man in his 40s, Mr Bommi made his annual trip back to India to visit his then 75-year-old mother. One of the first things she said? She had told a young man with a terrible skin problem, boils all over his face, to come see her son, and Mr Bommi was to take him to his doctor friends.

“I asked her, ‘Who is he? How do you know him?” And she just looked at me and said, “I don’t know. Do you have to know who he is, to help him?” That really struck a chord,” says Mr Bommi.

“When you want to help, helping someone you know is easier to do. My son, my child, my niece, my friend, my neighbour – when you have a “my” attached to anything, it is easier. It’s an extension of you, it’s easier to give. Now, to give to somebody that you do not know – that’s what my mother talked about.”

Mr Bommi himself has been on the receiving end of strangers’ kindness and giving too.

Arriving in the US as a 21-year-old, on money borrowed from a friend, Mr Bommi knew no one. Through those early months of adjusting to life in a foreign land and navigating the stress of changing schools and moving, he found some solace each night in lighting up a little prayer lamp his mother had given him.

A rough settling-in was made smoother by strangers who helped, says Mr Bommi. There was the Jesuit priest who helped him find accommodation, and then the Canadian-French family whose home he eventually lived in, among others.

These experiences led him to believe that most people are compassionate. “You see someone not well, hurt, the human instinct would be to go help. Thought manifests itself into words. Further on, the words manifest into actions… Most people will have the thought, but for whatever reason, it’s not shown.”

Taking action
Mr Bommi is not one to just let a thought be.

2015 marked his twentieth year in Singapore. He had arrived in Singapore as an expat, posted by his American company to be a regional director here. But when his term was up, he decided to stay on, started his own water filtration and purification business, and married a Singaporean.

Singapore is now home to him, he says. “I thought: now that I’ve settled down in Singapore, I wanted to do some charity work here.”

He had already set up a charitable foundation in India, Andal Cares, named for his mother. “All the blessings that we have – good health, good family, good wealth – all of that, we have to share…. We are only temporary keepers of this wealth – we have to share it. It’s been given to us for a purpose, to share.”

And so, he told his lawyer, he wanted to do the same here. But, he soon realised that it would take considerable time and resources to set a foundation up, find the right people to run it, meet governance requirements, and handle the administrative work involved. His lawyer pointed him to the Community Foundation of Singapore (CFS), as an option that could provide charitable fund management and philanthropy advice.

Given his desire to support eldercare services, CFS staff took him to visit nursing homes and rehabilitation centres to give him a better appreciation of Singapore’s eldercare landscape. Which is how he first discovered the work of Metta Day Rehabilitation Centre.

“Through the visits, I got a clearer idea of the different types and needs of eldercare support here. CFS helped to build on my interests, and hone in on the causes and impact I want to make, so that I could find a focus for my giving,” he said.

In March 2016, Mr Bommi started the Andal Cares Fund with S$250,000, under CFS, to support the Metta centre. He has since pledged to raise that sum to a seven-figure amount over several years.

Getting to know those you help
“CFS did an excellent job of setting up and managing my charitable fund, taking care of all the ground work for me – from evaluating programmes, conducting due diligence and disbursing grants, to reporting on impact. That’s a big relief for me as it frees up my time to concentrate on my volunteer work with the community,” says Mr Bommi.

His people-centred approach of giving also led Mr Bommi to support, through CFS, a pilot programme by Metta Welfare Association called “We are Bonded”. The programme introduces young befrienders to elderly persons, with the aim of building emotional bonds and enhancing well-being, while studying the benefits of inter-generational bonding.

“From my volunteer work with Metta, I observed that even though seniors are being physically rehabilitated, many of them experience loneliness or isolation and are emotionally withdrawn. Through this programme, we hope that we will be able to better understand and tackle the emotional issues of an ageing population.”

Because as much as he believes in the value of giving to those whom you don’t know, he also believes in getting to know the ones receiving his gifts.