Business Times: As they received, they now give 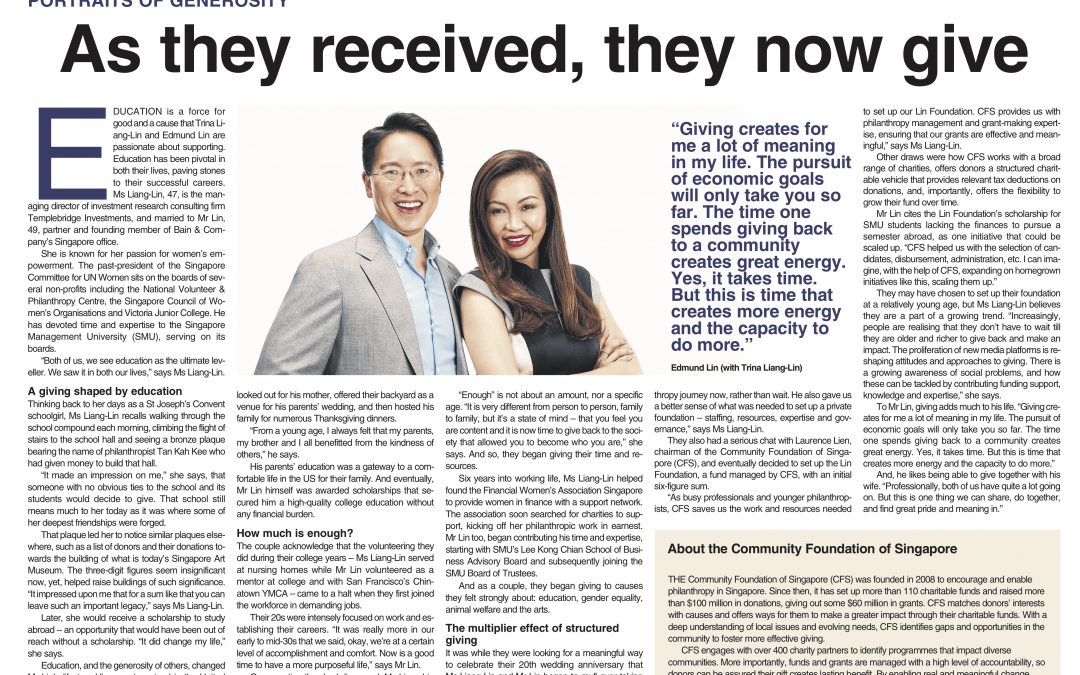 Education is a force for good and a cause that Trina Liang-Lin and Edmund Lin are passionate about supporting.

Education has been pivotal in both their lives, paving stones to their successful careers. Ms Liang-Lin, 47, is the managing director of investment research consulting firm Templebridge Investments, and married to Mr Lin, 49, partner and founding member of Bain & Company’s Singapore office.

She is known for her passion for women’s empowerment. The past-president of the Singapore Committee for UN Women sits on the boards of several non-profits including the National Volunteer & Philanthropy Centre, the Singapore Council of Women’s Organisations and Victoria Junior College. He has devoted time and expertise to the Singapore Management University (SMU), serving on its boards.

“Both of us, we see education as the ultimate leveller. We saw it in both our lives,” says Ms Liang-Lin.

A giving shaped by education
Thinking back to her days as a St Joseph’s Convent schoolgirl, Ms Liang-Lin recalls walking through the school compound each morning, climbing the flight of stairs to the school hall and seeing a bronze plaque bearing the name of philanthropist Tan Kah Kee who had given money to build that hall.

“It made an impression on me,” she says, that someone with no obvious ties to the school and its students would decide to give. For that school still means much to her today. It was where some of her deepest friendships were forged.

That plaque led her to notice similar plaques elsewhere, such as a list of donors and their donations towards the building of what is today’s Singapore Art Museum. The three-digit figures seem insignificant now, yet, helped raise buildings of such significance. “It impressed upon me that for a sum like that you can leave such an important legacy,” says Ms Liang-Lin.

Later, she would receive a scholarship to study abroad – an opportunity that would have been out of reach without a scholarship. “It did change my life,” she says.

Education, and the generosity of others, changed Mr Lin’s life too.

His parents arrived in the United States as struggling graduate students from Taiwan and Hong Kong. But they were shown hospitality and care. Mr Lin remembers one American couple that looked out for his mother, offered their backyard as a venue for his parents’ wedding, and then hosted his family for numerous Thanksgiving dinners.

“From a young age, I always felt that my parents, my brother and I all benefitted from the kindness of others,” he says.

His parents’ education was a gateway to a comfortable life in the U.S. for their family. And eventually, Mr Lin himself was awarded scholarships that secured him a high-quality college education without any financial burden.

How much is enough?
The couple acknowledge that the volunteering they did during their college years – Ms Liang-Lin served at nursing homes while Mr Lin volunteered as a mentor at college and with San Francisco’s Chinatown YMCA – came to a halt when they first joined the workforce in demanding jobs.

Their 20s were intensely focused on work and establishing their careers. “It was really more in our early to mid-30s that we said, okay, we’re at a certain level of accomplishment and comfort. Now is a good time to have a more purposeful life,” says Mr Lin.

One question they had discussed, Ms Liang-Lin says, was: how much is enough? “I think the secret of success in a lifetime is knowing when enough is enough for you.”

“Enough” is not about an amount, nor a specific age. “It is very different from person to person, family to family, but it’s a state of mind – that you feel you are content and it is now time to give back to the society that allowed you to become who you are,” she says.

And so, they began giving their time and resources.

Six years into working life, Ms Liang-Lin helped found the Financial Women’s Association Singapore to provide women in finance with a support network. The association soon searched for charities to support, kicking off her philanthropic work in earnest. Mr Lin too, began contributing his time and expertise, starting with SMU’s Lee Kong Chian School of Business Advisory Board and subsequently joining the SMU Board of Trustees.

And as a couple, they began giving to causes they felt strongly about: education, gender equality, animal welfare and the arts.

The multiplier effect of structured giving
It was while they were looking for a meaningful way to celebrate their 20th wedding anniversary that Ms Liang-Lin and Mr Lin began to mull over taking things a step further to formalise their giving.

“We spoke with Mr Teng Ngiek Lian of the Silent Foundation, who encouraged us to start our philanthropy journey now, rather than wait. He also gave us a better sense of what was needed to set up a private foundation – staffing, resources, expertise and governance,” says Ms Liang-Lin.

They also had a serious chat with Laurence Lien, chairman of the Community Foundation of Singapore (CFS), and eventually decided to set up the Lin Foundation, a fund managed by CFS, with an initial six-figure sum.

“As busy professionals and younger philanthropists, CFS saves us the work and resources needed to set up our Lin Foundation. CFS provides us with philanthropy management and grant-making expertise, ensuring that our grants are effective and meaningful,” says Ms Liang-Lin.

Other draws were how CFS works with a broad range of charities, offers donors a structured charitable vehicle that provides relevant tax deductions on donations, and, importantly, offers the flexibility to grow their fund over time.

Mr Lin cites the Lin Foundation’s scholarship for SMU students lacking the finances to pursue a semester abroad, as one initiative that could be scaled up. “CFS helped us with the selection of candidates, disbursement, administration, etcetera. I can imagine, with the help of CFS, expanding on homegrown initiatives like this, scaling them up.”

They may have chosen to set up their foundation at a relatively young age, but Ms Liang-Lin believes they are a part of a growing trend.

“Increasingly, people are realising that they don’t have to wait till they are older and richer to give back and make an impact. The proliferation of new media platforms is reshaping attitudes and approaches to giving. There is a growing awareness of social problems, and how these can be tackled by contributing funding support, knowledge and expertise,” she says.

To Mr Lin, giving adds much to his life. “Giving creates for me a lot of meaning in my life. The pursuit of economic goals will only take you so far. The time one spends giving back to a community creates great energy. Yes, it takes time. But this is time that creates more energy and the capacity to do more.”

And, he likes being able to give together with his wife. “We both, professionally, have quite a lot going on. But this is one thing we can share, do together, and find great pride and meaning in.”