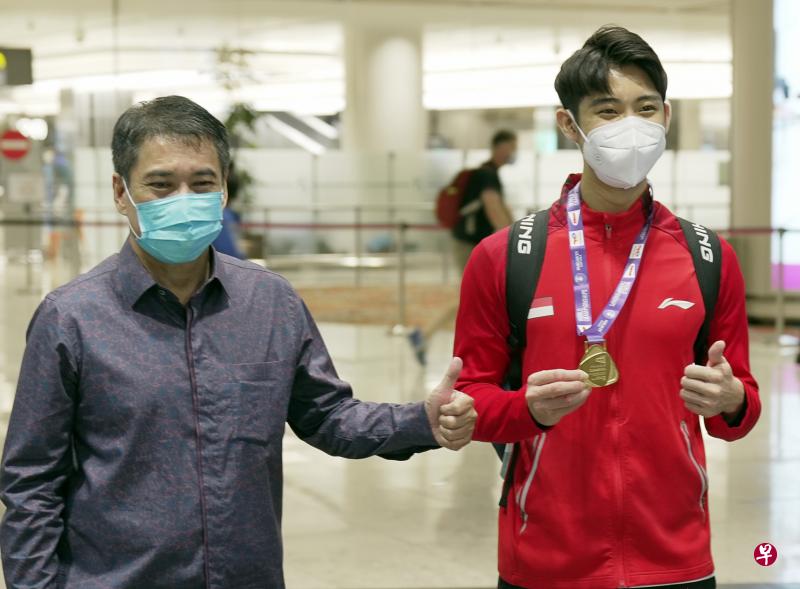 With his unyielding fighting spirit and humble personality, Loh took the spotlight and became a sporting legend. Loh’s commitment to his sports attracted the attention of many – including those around the world and region.

Underscoring his rising popularity in Indonesia, the Karim Family Foundation, set up by the Indonesian-Chinese tycoon Bachtiar Karim’s family with The Community Foundation of Singapore (CFS), awarded Loh with a donation of $200,000 for winning the Badminton World Federation World Championships.

The Karim Family Foundation wanted to congratulate Loh, now ranked as the world’s number 15 in men’s singles, for his win and hoped that the cash would motivate him to continue pursuing his sporting dreams.

The foundation contacted the Singapore Badminton Association (SBA) through the Singapore Press Holding Media Trust’s Chinese Media Group and under the stewardship of CFS.

Bachtiar Karim is the Group Executive Chairman of Singapore-headquartered oil conglomerate, Musim Mas. Musim Mas is an integrated palm oil firm run by Bachtiar Karim with his brothers, Burhan and Bahari. In 2021, according to Forbes, the Karim family had a cumulative net worth of around US$3.5 billion (S$4.7 billion), ranked 10th richest in Indonesia.

Through the decades, the Karim Family Foundation has donated to local charities and has had a focus on sports development, arts and culture, education and mental health sectors. The businessman is known for his philanthropy, having gifted S$2.27 million to his alma mater, the National University of Singapore, to start a professorship in sustainability in its business school in 2010 and another S$5 million to various causes, including the Singapore General Hospital and the Alzheimer’s Disease Association, in 2020. Despite his justified bragging rights, the businessman himself prefers to keep a low profile with his philanthropic work.

On behalf of the Karim Family Foundation, Chayadi Karim, son of Bachtiar Karim and the main manager of the family fund, told Lianhe Zaobao: “We have always believed in giving back to society. The purpose of the Karim Family Foundation Fund is to support all kinds of meaningful social activities. This time we want to reward Loh Kean Yew, and we hope that youths will set him as a role model. I think Loh Kean Yew is amazing. Badminton competitions are very fierce, in addition to skills, winning also depends on strong willpower. I have observed this young man for a long time, and I admire his never-say-die fighting spirit.”

Bachtiar’s daughter, Cindy Karim, another key administrator of the fund, said: “Our family is inspired by Loh Kean Yew’s tenacity, and it is also touching that he remains humble after such an impressive achievement. Through the Community Foundation of Singapore, we will try my best to inspire more youths to be future ‘Loh Kean Yew’s in Singapore.”

Commenting on the award, Loh who is currently playing in India for the India Open, told Lianhe Zaobao: “After I won the World Championships, well-wishers and sponsors such as Mr Karim sent me many rewards and encouragement, and I feel touched and immense gratitude for what I received. For athletes, this is a recognition of our hard work and sacrifice. Giving my best for my country has always been my number one priority. Knowing that there are so many generous people out there who are very supportive and encouraging local athletes is great and very important to me. There are so many people who have helped me in my life that I can’t thank them individually. I would not be on the podium without the support and encouragement of so many.”

Lawrence Leow, President of SBA, said: “We are deeply grateful to Mr Karim for his care and support for Kean Yew. Kean Yew’s performance on the court has inspired the imagination of a new generation of badminton fans and conveys an important message. Even though we are a small country, with the support of the many, we can still achieve good results.”

The Badminton World Championships is an event that only counts points and does not offer bonuses. The competition is not part of the “Major Games Award Programme” of the Singapore Olympic Council and therefore, Loh Kean Yew did not receive any monetary rewards despite his glorious return home.

On top of the latest S$200,000 awarded to Loh by the Karim Family Foundation, SBA revealed last week that Loh has been rewarded with an amount over S$250,000, combining a donation from local business people and public crowdfunding. Chinese sports brand Li-Ning, a sponsor of SBA, is also negotiating a long-term sponsorship contract for Loh, worth over six figures.

Subsequently, Chan, who led the first fundraising, set up another donation fund called the ‘Low Kean Yew Encouragement Fund’ via Ray of Hope earlier this year to allow contributions from the members of the public to contribute. Chan started the new initiative after many members of the public approached him hoping to show their gratitude in a similar way. Collectively, at the time of this writing, the two funds have raised over S$210,000.

If you too, would like to support a meaningful cause of your choice, please read more here.