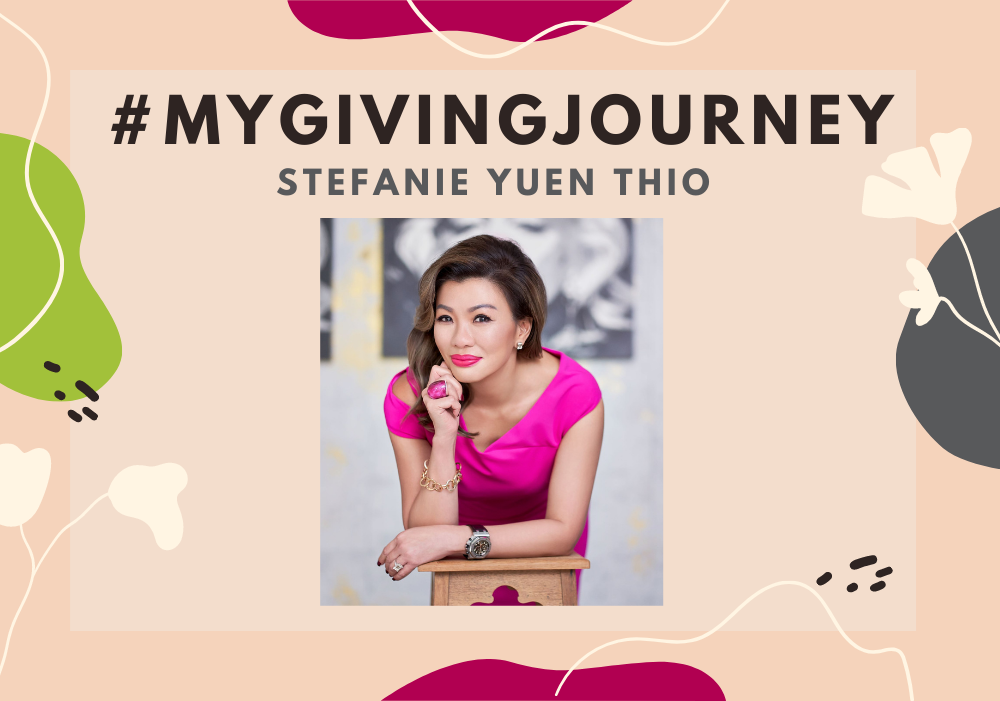 #MyGivingJourney is a series where CFS features extraordinary women in Singapore and their efforts in philanthropy. This story features Stefanie Yuen Thio, Joint Managing Partner, TSMP Law Corporation and Board of Director at CFS.

When COVID-19 first hit in early 2020, Stefanie Yuen Thio was appalled that healthcare workers had trouble getting a taxi or a Grab. It didn’t seem fair: front liners in our fight against the pandemic were shunned because people were afraid, they would transmit the virus. So Stefanie decided to do something about it.

Through her family’s #GivingBack Foundation, she donated $20,000 to start the Sayang Sayang Fund (SSF). One of the fund’s first initiatives was to give out taxi vouchers to nurses and hospital staff. SSF has since ballooned to over $9.6 million thanks to the generosity of Singaporeans and financially helped close to 360,000 people hard hit by the pandemic. But the outreach that remains closest to Stefanie’s heart is helping weary essential workers get a ride home.

SSF is one of several community impact funds under the Community Foundation of Singapore (CFS), designed to tackle unmet needs on the ground. Stefanie’s #GivingBack Foundation, meanwhile, is one of a growing number of personal foundations that CFS has facilitated. “CFS provides a guiding hand to people starting on their journey of giving, or those who want to be more purposeful and effective in their donations,” notes Stefanie, who is joint managing partner at TSMP Law Corporation.

Stefanie chose CFS as it is a cause-neutral, one-stop philanthropy advisory platform. It can set up funds quickly and cost-effectively. It works with over 400 registered charities in Singapore and can enlighten and match donors with the causes they are most passionate about — as well as highlight charities that have the greatest needs. Moreover, it conducts due diligence, which builds trust in giving. As Stefanie sees it, “CFS helps donors to structure their giving for maximum impact and sustainability.”

The #GivingBack Foundation has centred on children, the elderly and foreign workers. Among the charities, it has funded is Smile Asia, which provides free cleft operations to disadvantaged children in the region. And while Stefanie donates a tenth of her income to charity and the church, she believes writing a cheque is not the only way to contribute.

She makes an effort to volunteer in person and has involved her son Jonathan from an early age. When he was in primary school, she brought him along on all of her law firm’s charity events. This included learning to cook with intellectually disabled kids and a day out at the Outward Bound School with boys from Boys’ Town. When he was 15, Jonathan accompanied her on a trip to Uzbekistan to serve on a Smile Asia trip. “Now that he’s older, we involve him in discussions on how to allocate funds from the foundation,” she adds.

Exposing the next generation to philanthropy early will help institutionalise giving, making it less ad hoc and more strategic, she believes. “I would like giving to be a default. So that the question of “can I afford to give?” or “why should I donate when I already pay taxes?” is no longer a legitimate response,” she says.

She is already seeing this in Singapore. “It’s in the young people. They may not yet have built up a hefty bank balance but they give their time and with their hearts. I see it in older folks who want to leave some of their assets to charity when they pass because they are thinking about their legacy. And for the others, they want to invest in a better world for their children.”

Begin your own journey of giving with CFS. Read more about the #MyGivingJourney series here.