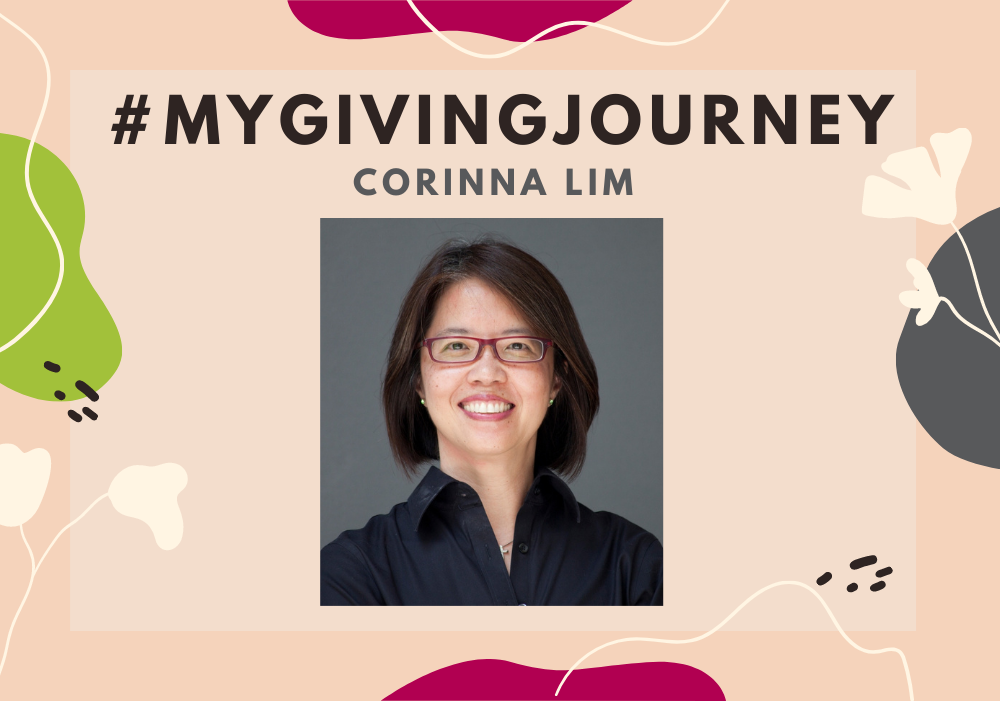 The #MyGivingJourney is a series by CFS where stories of remarkable women in the philanthropy sector are being told. In this story, we feature Corrina Lim, Executive Director at AWARE (Association of Women for Action and Research).

Serendipity played a big part in Corinna Lim becoming Singapore’s leading advocate for gender equality. She was working as a lawyer when a colleague who was pregnant asked if she would like to take her place providing free legal advice in a community centre. It was the early 1990s and opportunities for pro bono work were very limited.

Every month, Corinna listened to the problems of women who were dealing with family violence, unfaithful husbands, husbands who did not support the family or ex-spouses who reneged on maintenance commitments. “It gave me so much satisfaction to be able to help these women. I was dispensing fairly basic legal advice but they felt heard and were extremely grateful for my pragmatic approach,” she says.

The work was so fulfilling that she joined AWARE, the Association of Women for Action and Research, when they opened their legal clinic in 1992. Twice a month, after a long day’s work, she would offer advice, hope and empathy to women about their legal rights and options. “But rather than feeling depleted after these sessions, I always felt energised,” she says.

AWARE’s work struck a chord with Corinna because they tackled issues at the individual level as well as at the systemic level too, chipping away at barriers to gender equality. In 2010, almost 20 years after first signing on as a volunteer at AWARE, she left her corporate law career to become the first executive director of Singapore’s leading gender equality advocacy group.

As she sees it, AWARE has made an immense impact by pioneering, in 2011, sexual assault support for survivors and creating awareness of the challenges faced by survivors here. AWARE has also helped change laws which have resulted in more effective protection from harassment and more equal benefits for single parents. Its advocacy work has also contributed to the repeal of marital rape immunity and decriminalisation of attempted suicide.

AWARE also works closely with the Community Foundation of Singapore (CFS), which has long supported groups that help single mothers and marginalised women. Over the years, CFS has regularly facilitated grants from its donors to AWARE, including the recent grant call from Sayang Sayang Fund. Aside from this, CFS also collaborates with AWARE on research, most notably on a nationwide study on minimum household incomes.

Although she studied for a career in law, Corinna knew from a very young age that she wanted to give back to society. Right out of university, she started a small enterprise to make products out of recycled paper. Later, even as she plugged away at a law firm, it was pro bono work that engaged her. “I did not find meaning practising as a lawyer, representing banks and corporations in their claims against smaller companies or individuals,” she says. Instead, she found her calling in NGO work. “Doing the work has made me a more empathetic and better human being,” says Corinna.

Begin your own journey of giving with CFS. Read more stories from #MyGivingJourney series here.